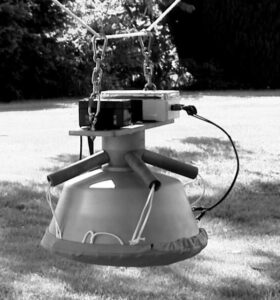 The Ace Capture suspended net gun or net launcher is good for capturing a wide variety of large and small animals. It works by throwing a net over an animal from above, covering an area greater than their leap.

The launcher is typically positioned on a rope strung between two trees or poles, a cantilevered beam or below a large tree branch. It fires a net directly down onto a target as it moves underneath.

Suspended units are often used to catch large, timid, fast or aggressive animals. They can also be used for capturing groups of smaller animals that tend to cluster together.

Our suspended net launcher has been used effectively with  Australian corellas and cockatoos; ducks and pigeons; American wild turkeys and hogs; feral pigs and goats; feral cats and dogs; racoons and possums; red deer, wapiti, ibex, elk, blackbuck, aoudad and axis; and legged reptiles. A version has even been used for capturing Russian wolves which are extremely cautious of humans.

Suspended net guns can be manually triggered, triggered by the animal or triggered remotely via a radio-controller.

Each unit comes in multiple sizes, and is matched to the size of the animal you want to catch.

The unit is sized to need, with canister size, net mesh size, net size and net weight matched to the target species. There is no variation in cost between large and small units.

Baited units fire when the bait hanging under the unit is tugged. These units are perfect for capturing single animals from a large target species (either ruminant or carnivore) as the bait can be matched to the species.  A unit can be left unattended for a period of time, allowing timid targets to approach without fear. We recommend regular checks of baited units to ensure captured animals are not left for longer than 12 hours.

Manual firing units are activated by an operator at some distance, using a lanyard trigger. These units allow for the operator to select a particular individual from a target species, or to capture a number of individuals. Because the operator needs to be relatively near the unit, manual firing works best for feral animals like dogs and cats, or larger birds like geese who are not disturbed by a human presence.

Large or small Suspended net gun with baited trigger and/or manual firing: US$3575.00

The suspended net gun with radio controlled remote firing works in an identical way to the baited trigger or manual firing unit except that it allows for manual firing at a distance up to several kilometres.

This unit is ideal for capturing very timid or aggressive species as it reduces human presence prior to capture.

Selective capture is also easy with radio firing as the operator can be several kilometres away observing through binoculars and can trigger the unit whenever the selected animal is in position.

As with the baited or manual-triggered unit, the radio controlled unit is sized to need, with canister size, net mesh size, net size and net weight matched to the target species. There is no variation in cost between large and small units.

The radio controller that ships with this net gun can be used on any of our other products, including our mass capture option. For more information, contact us.

The suspended net gun with all three firing systems offers full flexibility of use, delivering the benefits of each firing system in a single unit. This unit is designed for operators who regularly capture the same type of target species in different situations.

Large or small Suspended Unit with all three firing systems: US$5,460.00

Small and large units have identical pricing. All units come with everything needed for operation. Spare components can be ordered separately if required.